The Boy with the Tree

Once upon a time, a tree started to grow on a boy’s head. It just happened naturally; it was spring after all. But it’s one thing for a tree to grow in the countryside and quite another for it to grow on a boy’s head. Imagine the problems this would create —for example, when watching a movie, a play or a circus show, or riding a bus, and, of course, at school. So the boy started to hide his tree under a woollen hat. But with summer approaching and the tree still growing, he wouldn’t be able to hide it for long. And when the town found out the truth, everyone was shocked. Was there a danger this could spread to other children? To the rest of the town? Just in case, the town decided the boy should stay home for the remainder of the school year.

So the boy spent that summer at home, taking long, solitary walks in the nearby park. Until one day, he met a strange cyclist. It was midsummer, but the man wore a tuxedo and top hat. He was fascinated with the tree and perplexed by the boy’s bad mood: there’s nothing peculiar about a tree growing on a boy’s head, he exclaimed. Indeed, he said, the boy was very lucky for the man claimed to have seen far worse than a tree growing on someone’s head: a zoo full of melancholy animals; a ladder that the fire department used for emergencies; an alarm clock that wouldn’t stop ringing; a grouchy elephant; a chubby woman with a fine moustache, who looked a bit like a general. There’s something that grows on all of us, the man declared. And he took off his tuxedo jacket to reveal a pair of wings. The boy was not amused. The man dressed ridiculously just to hide his wings and was lecturing him about the tree. Everyone thinks their own problems more serious than everyone else’s. The man explained that when you have wings things are really dangerous: you may be taken for a pterosaur or a rare butterfly or for a singing bird and be put in a cage. He got on his bike to leave, but before disappearing from the park he gave the boy a little package marked “Solution”.

The package contained a mirror with a card attached that read “Have a Good Look”. The boy shook and rubbed the mirror but no obvious magic happened. He felt silly for having taken such a ridiculous man seriously. Then the boy took a good look at himself. Well, you wouldn’t call his nose perfectly straight, his shoes were rather dusty, and his clothes were not of the latest fashion either. A tuxedo is after all convenient with all those pockets. And the tree didn’t really look that bad. Birds liked it, too. You just had to be careful of their droppings.

The boy felt hungry and decided to go home. As he was leaving the park, the mirror fell out of his pocket.

Our story could end here, if the mirror didn’t have a story of its own worth telling. They say that subsequently it changed quite a few hands: a red-haired boy; the son of a shop-keeper; his father; a baker; a barber; a policeman; a journalist; a doctor’s wife, and many more. Finally it ended up in a country where people don’t walk but instead ride ostriches or hippopotamuses or tame crocodiles. One of those crocodiles was taking a very important person to his swimming pool, but when the poor beast saw itself in the mirror, it… Well, we don’t really know if what people say is true.

As for the boy with the tree, not only was he quite happy, even proud of it, but soon he made a very good friend: a new girl at school who had nine red tulips on her head! They spent a lot of time together, took gardening classes, and at carnival they dressed up as astronauts—which has nothing to do with trees or tulips, but why should it? And we heard that, day by day, new trees and flowers started to grow in their whole neighbourhood. Who knows? It may be true. We certainly hope so!

RODOULA PAPPA is a writer and translator of children’s books. Her first book The boy with the tree (2012) was awarded the Greek National Prize for Children’s Literature. She is co-founder of the Volatilium and Tsalapeteinos children’s books imprints.

PAOLO GHEZZI was born in the village of Savigno, Italy, not far from Bologna. He graduated from the Academy of Fine Arts of Bologna. In 2009 he co-founded with Nadia Antonello the artistic collective “Antonello Ghezzi” which has exhibited all over Italy and Europe, as well as in Buenos Aires, Argentina. He has illustrated several books for adults as well as several children’s books for Nefeli Publishing: e.e.cummings: Fairy Tales and Little Tree; Rodoula Pappa: The Boy with the Tree, Alphabet Book, Counting Book; Little Red Riding Hood in the original text, collector’s edition. He lives and works in Bologna, Italy. 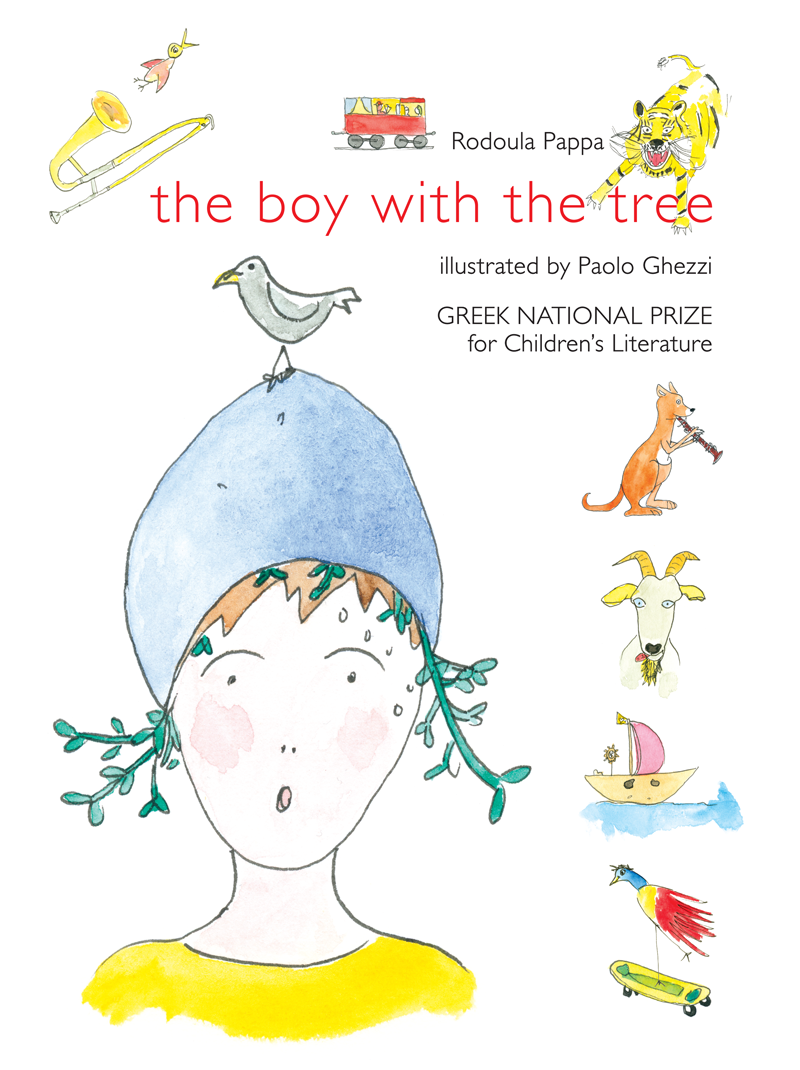 Rodoula Pappa
Paolo Ghezzi
The Boy with the Tree